In our mission to bring investable diamond commodities to the broader market, we encounter common labeling misconceptions that have proven persistent – and which, without a more informed perspective, sometimes hold investors back from realizing the full benefits of these popular stones as investable assets.

Natural diamonds are formed under high temperature and pressure conditions that exist about 100 miles beneath the earth’s surface, according to the Gemological Institute of America (GIA), a nonprofit dedicated to research and education in the field of gemology. A natural diamond is made from carbon and is the hardest natural known substance on earth. Natural diamonds are created over a period of one to three billion years, at least 85 miles below the earth's mantle under natural conditions of very high pressure and high temperature.

Lab-grown diamonds have many names and descriptions including laboratory-grown, laboratory-created, man-made, artisan-created, manufactured, above-ground or cultured, according to the Federal Trade Commission (FTC) - the U.S. government agency in charge of ensuring transparency and fairness in commerce and protecting consumers.

Each diamond is produced and manufactured in a controlled technological process in a laboratory or factory. The end result is a stone of pure carbon crystallized in an isotropic 3D form that mimics some - but not all - natural diamond properties.

Diamond simulants are simply imitations made of superficially-similar non-diamond materials (e.g. rhinestones, moissanites, white sapphires or cubic zirconia). According to GIA, they look like real, natural gems but a ‘diamond is harder than any simulant’. A special type of simulant is a ‘hybrid diamond’ which consists of a crystal core with a lab-grown diamond infused to the outside of the core. This gives the product a higher durability factor. For example, the GIA identified a “0.64-carat fancy grayish-greenish blue cushion modified brilliant” as a natural diamond with CVD synthetic diamond overgrowth. 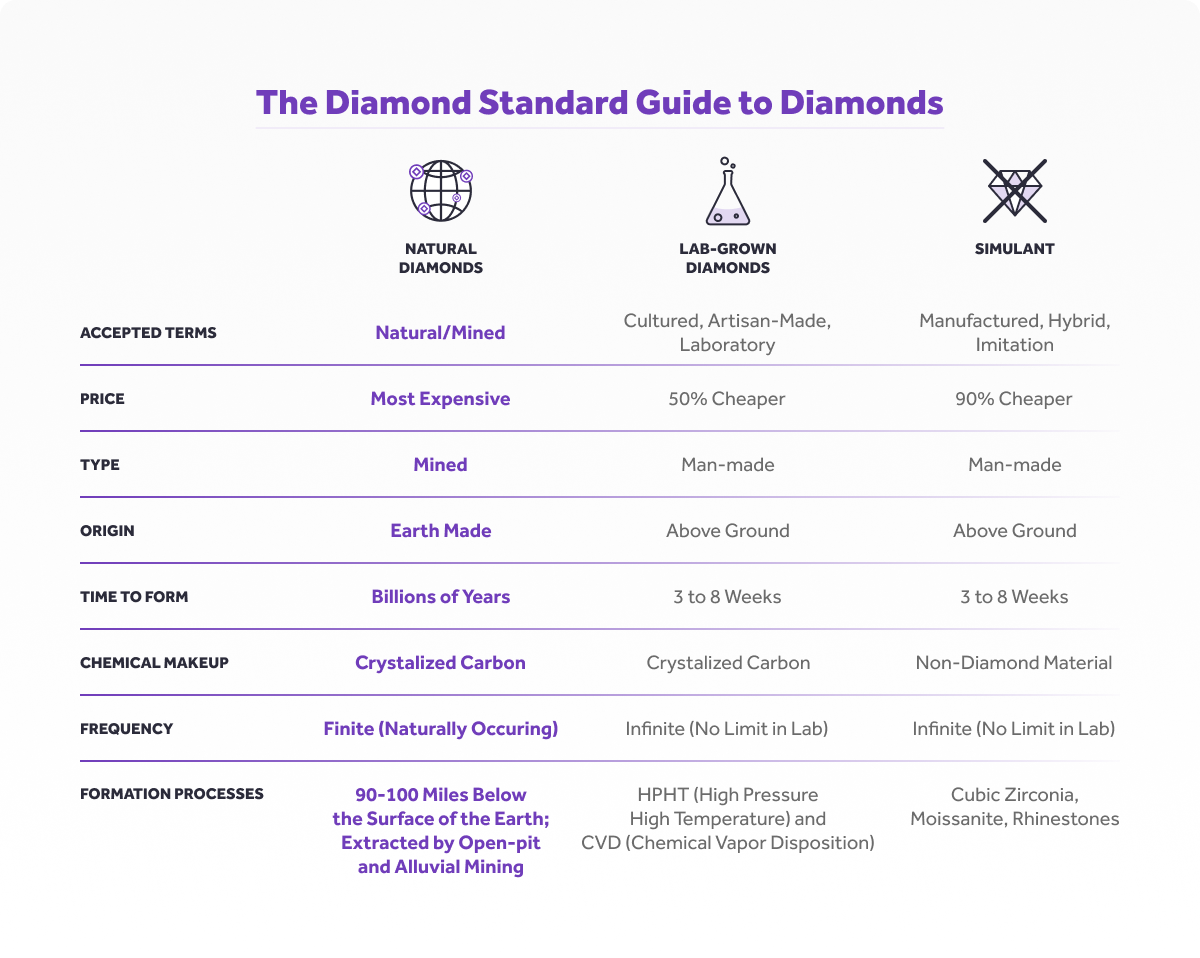 A key distinction between natural and lab-grown plus simulant diamonds is earth made vs above ground. Above ground diamonds are diamonds with an origin above the ground on Earth rather than underground. They are grown from a seed through a technological process that mimics natural formation and, according to FTC, can be also called ‘cultured’ and ‘lab-grown.’

According to the FTC ruling from 2018: “Since then, technological advances have made it possible to create diamonds in a laboratory. These stones have essentially the same optical, physical and chemical properties as mined diamonds.”

The differences between natural diamonds and lab-grown diamonds sometimes cannot be seen with the naked eye. In fact, specialized tools, such as the GIA iD100® gem testing device that uses fluorescence spectroscopy rather than UV light, allow gemologists to tell the two apart.

Jewelers without access to reliable detection technology can also send the diamonds to a gemological laboratory for verification. The GIA has a special report service in which a manufacturer or a jeweler can send in a parcel or a package of natural or lab-grown diamonds that can be tested in-house by GIA gemologists.

There are many terms used to describe diamonds grown in a lab. There is also the never-ending-debate over the use of the term ‘synthetic’ or even ‘artificial’ because it can be easily misinterpreted for ‘lab-grown’ or ‘simulant’ which is incorrect. The FTC has made far-reaching changes to guidelines long unfairly manipulated by the diamond mining lobby, according to Diamond Foundry, a producer of lab-grown diamonds in San Francisco, CA.

According to the FTC, the term ‘synthetic’ is no longer relevant given “the term is often interpreted as being ‘artificial’ when in fact man-made diamonds are not artificial.” Lab-grown diamonds may now be called gemstones, and diamond growers are allowed to market their diamonds using terms like “aboveground” and “cultured.”

Since advancements in technology have made it possible to re-create the earth’s conditions and create diamonds atomically identical to mined diamonds, the use of the words such as “synthetic” can mislead consumers as they can mistake it with “artificial.” Man-made diamonds are not synthetic.

With enormous price disparity and growing popularity of natural diamond alternatives, it is important to highlight a clear distinction between all three categories. Our guide aims to help debunk some of the overlap and stigmas associated with all types of colorless gemstones. As for FTC’s updated rules and regulations it remains to be seen that natural diamonds and lab-grown diamonds get separate definitions. They are currently defined as one.

According to the FTC “a diamond is a mineral consisting essentially of pure carbon crystallized in the isometric system. It is found in many colors. Its hardness is 10; its specific gravity is approximately 3.52; and it has a refractive index of 2.42.”

Join us in the pursuit of exploring commodities
and cryptos — and, of course, diamonds.