Commodities May Have Just Begun A New Supercycle

Over the past few months, we witnessed a broad surge in commodity prices. This upward movement is fueling expectations among the analyst community that commodities may have just begun a ‘new supercycle.’

What we are seeing is perhaps something more complex, the transition towards a low-carbon economy (i.e. to tackle climate change) as well as the overlay of several cyclical upswings of different raw materials, including Uranium – a very important silvery-gray metal because it provides us with nuclear fuel used to generate electricity in nuclear power stations.

As any investor knows, when one buyer begins acquiring large volumes of available supply in a given market, the price of that asset will only go one way – up.

Sprott & A New Trust: Priming the Uranium Market for Growth

Take a close look at the Bloomberg chart below showing the one-year performance (April 2021 to April 2022) of the Sprott Physical Uranium Trust (green line) and an Index of Uranium Producers (blue line). 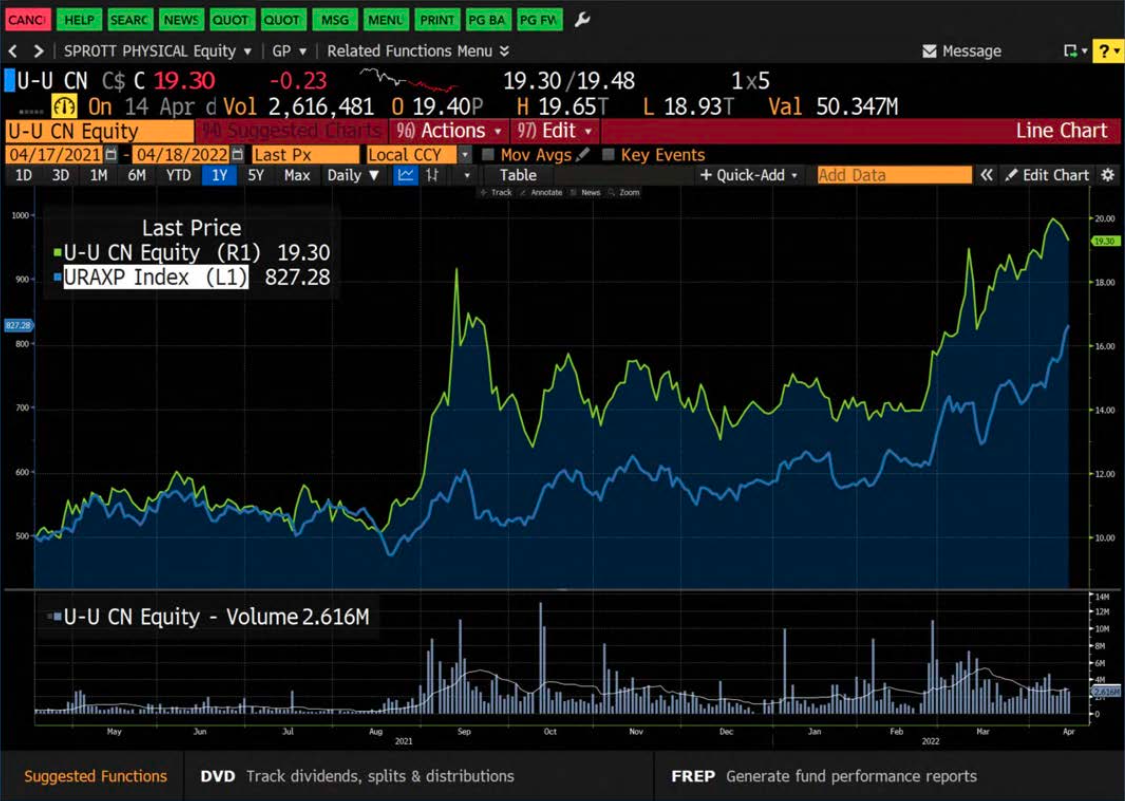 Uranium’s value started to rise in the last quarter of 2021, hitting a nine-year high of $48/pound in September. The price spiked after Toronto-based investment fund Sprott Asset Management LP began buying up millions of pounds of excess supply for a new trust, S&P Global reported.

As the world’s largest – and only – publicly-listed physical uranium fund, the Sprott Physical Uranium Trust gave the investment community at large a new way to hold uranium directly, rather than adding exposure to their portfolios by purchasing shares of uranium mining or equipment companies.

The Sprott Physical Uranium Trust seeks to capitalize on what its managers hope will be an emerging super-cyclical increase in uranium prices, which took a major hit after the disaster in Fukushima, Japan in 2011. As a notable green energy source, uranium demand has continued to significantly outpace supply, given that very few new mines have been opened in the last 20 years. (Sound familiar?)

The factor that makes the Sprott Physical Uranium Trust such a unique case is the sheer scale of its at-the-market uranium purchases in 2021.

Uranium prices eased to $45/pound level in the last days of 2021 and in January 2022. It started to climb towards $50/pound in early March following the invasion of Ukraine and hit $60/pound on March 11. It was the highest price since mid-2011.

The Case for Diamonds

Interesting things happen when investors are offered new pathways to access valuable commodities – especially when those commodities are faced with severe supply constraints, similar to the prevailing dynamic in the diamond market today.

With the upcoming launch of the new Diamond Standard Fund, our firm is poised to become one of the largest single purchasers of diamonds in the world.

Of course, the market for diamonds is different in many fundamental ways from the market for uranium, and the experience of the Sprott Trust – and its impact on uranium prices – may not be a perfect predictor of the effect our Diamond Standard Fund will have on the global diamond market. However, for investors who are interested in the dynamics of price fluctuations in worldwide commodities markets – and especially those with an interest in the future of the diamond market – we would suggest that it is too important a case study to ignore.

Join us in the pursuit of exploring commodities
and cryptos — and, of course, diamonds.